Remember Me Wiki
Register
Don't have an account?
Sign In
Advertisement
in: Pages with reference errors, Articles with spoilers, Remember Me Characters,
and 3 more
English

Edge, contains plot and/or ending details of Remember Me and its related media. Proceed at your own discretion.

Edge: "Hury, this is our last chance to shoot Memorize, right in the brain stem!"
Nilin: "Another errand? I'm not some obedient Valet, Edge."
Edge: "And I'm not your conscience, Nilin. You're as free as any other human."
—Nilin and Edge[2]

Edge[3] is the leader of the Errorist Movement against Memorize and the Sensen Technology. He guides Nilin through Neo-Paris in the search to regain her stolen memories.

Before the creation of the persona "Edge", H3O was an artificial intelligence created by Charles Cartier-Wells to maintain the Conception Cube's central memory servers. He was given accidental sentience by the memories of a young Nilin Cartier-Wells. His very first memory was of her crying because she was lonely and felt abandoned by her parents, who were preoccupied with their work.[4]

H3O's resentment of humanity's need to discard their painful memories or things they'd rather forget was gradual. As Memorize and Sensen gained more prominence and use among the public, so did H3O's anger. Eventually he created a persona though to act through: Edge, a radical who wanted to see the end of Memorize.[4]

The beginnings of Edge's Errorist Movement is never explicitly revealed through the history of Neo-Paris. According to the Mnesist Memory discovered shortly after Nilin Cartier-Well's escape from La Bastille fortress and her arrival to the Leaking Brain[5], Edge is identified as the founder of the Errorist Movement[6], which made its presence and agenda known sometime around April of 2076, as Memorize was recovering from its first Sensen-related death with Vincent Applan.[7]

He gathered like-minded individuals to his cause to use the Memorize Corporation's own technology against them in an effort to reveal what he believed was a commodification of memories in a worldwide effort to ignore the realities of the world by erasing "bad memories".[6]

Edge broadcast public messages to all of Neo-Paris about Memorize's means of spreading its "criminal amnesia". At some point during 2080, a former Memory hunter, Headache Tommy, introduced Edge to the daughter of the heads of Memorize, Nilin Cartier-Wells. Nilin, already an accomplished Memory Hunter, was granted audience with Edge and the two formed a partnership when Nilin joined the cause of the Errorists.[2]

Collapse of the Movement

By 2084, the Errorist Movement had been dwindled by the combined efforts of S.A.B.R.E. Force and La Bastille Fortress, which presumably doubled its arrests and memory wipes of Errorists taken into custody after the death of Frank Forlan. Nilin became an unfortunate causality of their falling ranks when she was caught in her safe house after convincing Forlan to commit suicide upon remixing his memories.[8] Edge, however, remained at large.

It's suggested that Edge orchestrated circumstances leading to Nilin's arrest and subsequent memory wipe, in order to successfully remix Scylla and Charles Cartier-Wells. With Nilin in La Bastille, Edge worked on breaking her out, hacking the prison's security systems and providing a disoriented Nilin somewhat safe passage back into the outside world.

Edge guides Nilin through Slum 404 and back to Headache Tommy where she encounters Olga Sedova.[5] Promptly after remixing Olga's memories so that she would work with them, Edge and Nilin used her to gain access into Mid-Paris. Edge set up a rendezvous point with a fledgling Memory Hunter, Bad Request, so that Nilin could gain access to Kaori Sheridan and steal the blueprints for the Saint Michel Dam.[9]

Once she gained the blueprints from Sheridan, Nilin sent the information to Edge as soon as he worked past the malware Kid X-Mas filtered into their communications channel. Following Kid X-Mas's defeat, Edge sabotaged the dam, flooding all of Mid-Paris. His actions dislocated countless citizens, but allowed Nilin access to the Metro where she would search for Johnny Greenteeth, a Leaper who knew things "other cared to forget", including a way into the Bastille without being detected.

After she was successful in stealing Greenteeth's memories, she infiltrated the Bastille and faced the Madame and releases memories of the prisoners (Errorist and civilian alike), which sparked a rebellion against the established Prison Enforcers. Edge rejoiced at the realization that the rebellion against Memorize was reignited.

He reassured Nilin that her memories would be restored her as the prison's backups were always working. When she received her memories, it was only a partial restore. Concerned, Edge speculated Madame likely moved the rest of Nilin's memories "elsewhere" (unaware Charles Cartier-Wells had them in his possession).[8]

Next, Edge ordered her to head for Memorize Head Office and remix the memories of Scylla Cartier-Wells. Edge expressed disdain for Scylla's actions, describing her as a "bitch" who needed her "errant beliefs" crushed.[2] Before she enter the head office, she had to find Gabriel Trace, who had the codes that would allow her inside. Edge attempted to locate Trace using the Aug Lock, however, Trace had tracked Nilin down before he could.

During Nilin's evasion of Trace, Edge grew frustrated with how long it was taking Nilin to complete her objective. After she successfully stole Trace's memories, she headed for the head office of Memorize. Edge's opinion of Scylla became notably softer and pitying her the president of Memorize because of her "tragic accident".[2]

When Nilin volunteered to make her forget her tragedy, Edge told Nilin to make Scylla feel responsible for the accident that scarred her. Uncertain of her actions in light of discovering she had been responsible for the death of Fran Forlan, Nilin's distrust of Edge became stronger after remixing Scylla's memories and learning she was her daughter.[10]

Edge dealt with Nilin's anger toward him for being manipulated, urging her to find Bad Request, so that she could gain access to Sebastian Quaid and destroy what remained of the Reconversion Project following Scylla's change of heart.[10]

When they finally reached Mnemopolis, Edge urged her to head for the heart of the Conception Cube. They encounter Gabriel Trace, who's memories are breaking down and pushing him further toward Leaperism. Nilin hunts him through the city until he is killed by two Mourners who steal his memories.

Edge, suspecting the Mourners are a new Leaper mutation, tells her that she has to defeat the two Mourners in order to get the bulk of Trace's memories. Once she does, Nilin uses Trace's memories to break into the Conception where she faced Charles Cartier-Wells.

Edge, harboring little to no love for Charles, pushed Nilin to make Charles believe he had killed his daughter during his first remix attempt. Afterward, Edge becomes erratic and overexcited as Nilin's parents come to conclusion that they must destroy the Sensen technology that sparked so much conflict in Neo-Paris.[4]

Nilin realized that Edge wanted her to remix her parents all along. On the path of the central memory servers, Nilin lamented that she would finally get to meet Edge, but wondered how she would destroy H3O. Indirectly, Edge responded, "the same as any other machine". He disconnected communication from Nilin, overwhelmed by the memories of her childhood on the day she gave him sentience.[4]

When he reestablished connection, he spoke in riddles, using phrases ("So empty, so true") from the Leapers until Nilin came to the conclusion that Edge was in fact H3O. When she entered H3O's Ego Room, H3O referred to his Edge identity was a "partition" programmed to bring Nilin to him. It along with H3O was destroyed by Nilin.[4]

Edge is often calm, and urgent when guiding Nilin to her memories and objectives. According to Nilin, he talks more like "a poet" as speaks in a series of "riddles". He also does not seem to be concerned when Nilin begins to distrust him after the end of "Headshot".

But, following the destruction of the Saint Michel Dam there is a sudden change in his personality as he becomes quite bad-mouthed and angry when referring to Scylla Cartier-Wells, as he is rather passionate about getting the president of Memorize to feel guilty over her actions and part in the Reconversion Project. He reverts back to his normal, calm, guiding self for the next two episodes.

Before and after Nilin remixes Charles Cartier-Wells memory, Edge becomes quite unhinged, no longer sounding calm but more erratic. Edge by his very nature was deceptive and manipulative. Nilin did not realize that Edge was a persona for H3O until she was in the heart of the servers. Prior, she realized that the tasks she completed were in the name of remixing her family so that she could kill Edge's true persona, H3O.

Edge is noticeably a skilled program who knows many things about technology. He is, put simply, a "Techy". He aids Nilin, by hacking into systems, tracking people and machinery down, and transferring codes. He is also a capable leader as he founded the Errorist movement. He planned out Nilin's path and tasks and was always steps ahead of Nilin herself. Edge had Nilin remix both Scylla and Charles under the guise that it would benefit the Errorist. However, in truth, he needed her to remix them because only together, could they give Nilin access to the central memory servers of Memorize so she could destroy H3O.

Early on in the development of Remember Me, Edge was initially realized as a human character[11][12] who communicated with Nilin through a live camera feed on their sensen. A latter build of the game, however, saw the Edge character reworked into something closer to his final design, albeit with more distinctive human features.[13] 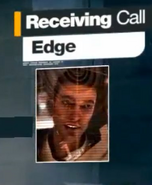 Edge as he appeared in the second 2012 Gamescom Demo.