The Elite Enforcer is an uncommon S.A.B.R.E. Force enemy-type in Remember Me.

Elite Enforcers protect Memorize institutions, such as the Memorize Head Office and La Bastille Fortress. Using a Sensen Remote, they are able to control Leapers that have been subjected to the Reconversion Project.[5]

Heavy Elite Enforcers are similar to the standard Elite Enforcers. They are stronger than the standard Heavy Enforcer or the Heavy Prison Enforcer. Their armor, health and C3 Shield is also stronger. It is safe for the player to use their junk bolt to destroy their C3 Shields as the armor's electric qualities are not extended to the shield.[5]

However, once the shield is destroyed, the same tactics against the Elite Enforcers must be used against the Heavy Elite Enforcers. Alternatively, Logic Bomb can also destroy C3 Shields without risk of Nilin taking any damage for their armor.[5] 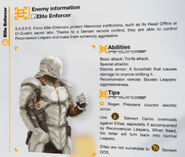