The Enforcer is a common S.A.B.R.E. Force enemy in Remember Me.

Like most S.A.B.R.E. Force enemies, the Enforcer's strength lies in their numbers. Nilin can be easily overwhelmed by any number of Enforcers if the player is not careful about how they approach them.[5] Their weapon, the Tonfa, is an electrified weapon that function not unlike the baton can deal serious damage to Nilin if she does not evade or prevent their attacks.

In general, Enforcers don't require any specific strategy. The S-Pressen, Sensen Fury, is extremely helpful when needing to deal an effective amount of damage of a large number of Enforcers. Enforcers are slow and their hits are infrequent. Overload to a single or multiple Enforcers takes them out in one blow, minimizing damage overall if the player is able to avoid taking too much damage.

The Heavy Enforcer is a variant of the standard Enforcer enemy type. Similar to the Enforcer, their marked difference is that they're armed with a 3C Shield. They are the same difficulty as the standard Enforcers, however, their 3C Shields must be destroyed in order to attack them. Additionally, their special attack, "Spartan Attack", wherein Heavy Enforcers regroup and attack at once, cripples Nilin's health. On Script Kidde, Nilin can stand up to four shield attacks, two on Errorist Agent, and only one on Memory Hunter difficulty. The 3C Shield can be destroyed easily with the Spammer or Junk Bolt. 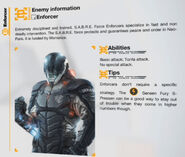 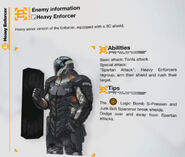