"It's what I do that teaches me what I'm looking for."
—Pierre Soulages[1]

"Episode 1: Low Life/Low Tech" is the second level of Remember Me.

Outside the walls of La Bastille, Nilin traverses the Leaper-infested terrain of Slum 404 to reach the Leaking Brain to meet up with Headache Tommy. All the while, Nilin is unaware she is being hunted by Olga Sedova, who's looking to get even with the memory hunter.

Trapped in the coffin she took to escape La Bastille, Nilin demands to be set loose from the confined space. The mysterious voice, however, demands that she remain calm. He introduces himself as Edge, and tells her she has to trust him. Nilin, doubtful of his credibility, reminds him that she trusted him and now she was trapped inside a coffin. Ignoring her fear, Edge goes on to explain that her enemy is a major corporation named Memorize.

She was apart of a resistance group known as the Errorists and one of the best. They attempted to prevent the commodification of the populace's digitized memories after Memorize rose to power. However, they failed and Nilin was among the Errorists arrested for their actions.

When the coffin was dropped off in Slum 404, Nilin was left to drift in the flooded district. A group of Leapers were scavenging the coffins, looking for survivors like themselves when they came across Nilin's coffin and opened it. Her appearance shocked them, equally shocked, Nilin attempted to placate them. Threatened by her, the Leapers attack Nilin despite her reluctance to harm them.

Nilin manages to fend them off, Edge explains that the Leapers are mere humans "abandoned" by Sensen and Memorize. As more Leapers appear, Nilin chooses to follow them through the Slum. Edge tells her to find Headache Tommy, a man who is already expecting her. When Nilin asks who Headache Tommy might be, Edge tells her to keep going and that he'll provide directions "if and when". Nilin does as she told, traversing the broken landscape, avoiding Leapers as she does. When she asks again, Edges tells her that Tommy was her friend and once was a memory hunter like herself.

He gave her directions to the Leaking Brain, a bar in a cargo haul over the canal of the Slum 404. Nilin continues to travel upward, following the fleeing Leapers she encounters until she reaches an open area of the Sums with a view of Mid Paris in the instance above it. A Surveillance Droid floats down in front of her, advertising the Leaking Brain's specials. Nilin continues to follow the Leapers through the Slums and comes across a group of them in an open area. Before she can properly approach them, she ambushed from behind, which agitates the surrounding Leapers. Fighting them off she continues through the Slums, following the advertisements for the Leaking Brain.

Climbing upward, Nilin encounters a group of fleeing Leapers following after her, using the exposed pipes and catwalks on the surrounding buildings. One attempts to kill her, tearing the pipe she's climbing up from the wall. He falls and grabs onto her leg, but she manages to knock him loose before resuming her climb. At the top of the building, she encounters a group of Leapers fighting against other Slum 404 residents.

She waits above until the fighting is over and then proceeds downward. Before she can go onward, a Skinner mistakes her as the person responsible for what happened to Leapers harmed in the conflict, and attacks her. Nilin fends off the Leaper ground surrounding the Skinner and defeats him afterward. Shocked by the knowledge that the Leapers are attack citizens, Edge reminds her that Leapers were also citizens of Neo-Paris. Using a crane to access another path, Nilin crosses a market to get to the Leaking Brain.

When Nilin arrives to the Leaking Brain, she is greeted by an overexcited Headache Tommy, who is relived to see that Edge managed to break her out of La Bastille. Nilin is made uncomfortable by Headache Tommy's open affections, unsure whether or not she can trust him. Headache Tommy instructs her to follow him so she can get out the Bastille's prison uniform. Nilin follows, unaware she is being watched from above by the bounty hunter, Olga Sedova. Tommy explained that the Hunt Glove sitting on the table across from them was hers and that he rescued it and her "combat skin" from her safe house after she was arrested. He complimented the design of the glove, noting it was above the model he used to use.

Curious, Nilin asks what happened to Tommy during his time in the Bastille. Reluctantly, he admitted that he was forced to stay for the entire "program". He excused himself to allow her to get dressed. When one of his customers attempted to catch a glimpse of her naked, Tommy threatened to "call Johnny" on him, causing the man to run for his life. Tommy assured her that Bob's poor memory ensured that he wouldn't inform the likes of Olga Sedova about her whereabouts. Nilin asked whether or not Olga was dangerous and Tommy informed his friend that Olga was "determined" enough to turn the Slum inside out to find her. No sooner than he relayed the information, Olga grabbed Nilin from behind and promised to do more than just "catch" Nilin. Tommy, realizing too late what was happening, attempted to stop her. Olga shoved Nilin aside and attacked Tommy, rendering him unconscious. Refocusing her attention on Nilin, she prepared to kill Nilin in her husband's name when Nilin accessed her Senwall.

Three hours prior to their encounter[2], Olga was attending to her ill husband, David, who is suffering from memory degradation from excessive memoriel deletion of his memories and beginning to exhibit symptoms of Leaperism. Sebastian Quaid was tending to her husband's memoriel transfusion, explaining that shared memories of happier times would aid in David's healing process. When David becomes agitated during the transfusion, Quaid feeds endorphin's into his IV to calm him. Olga, desperate for the treatment to work, begs her husband to remember their relationship and himself.

Quaid assures Olga that the Nymphea Hospital is the best place where David can be treated for his illness with time. During their conversation Olga receives a notice for the arrest of Nilin Cartier-Wells for 300,000.00 euros as Quaid begins to suggests scheduling more treatments. When he begins to touch upon the expensiveness of the treatments, Olga is quick to assure him that she can cover the expenses.

Upon glimpsing this memory, Nilin thinks fast and begins to remix Olga's memories. Instead of receiving proper treatment, she makes Olga believe that Quaid kills her husband when he manages to break free of his restraints and attacks him. Olga, situated behind the glass, can only watch as her husband is killed by the quarantine protocol activated by Quaid.

None the wiser, Olga believes the events as remixed in her mind have come to pass and turns against Memorize. Headache Tommy almost gives Nilin's actions away to the bounty hunter, but Olga is quick to dismiss Tommy's forced happiness with a reminder that they aren't friends because they aren't on opposite ends of the conflict any longer. Reminding the bounty hunter that Nilin is wanted by Memorize, he asks whether or not she had any ideas on how to help Nilin infiltrate Mid Paris's San-Michel District. Olgia calls for her Kaizer Kraft. Before Nilin departs, Tommy tells her that everyone depends on her mission to succeed. 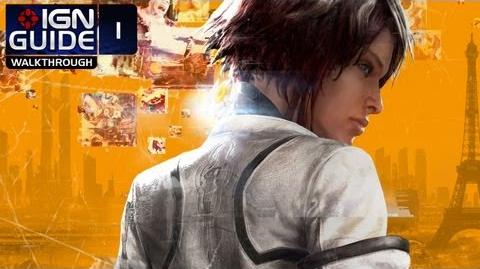 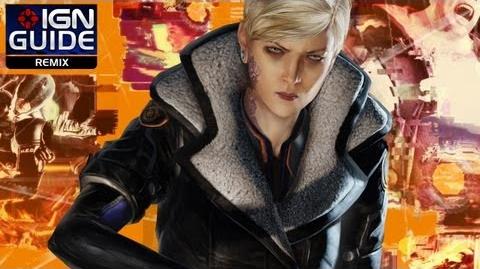