Without knowing what year it is, and who she was, Nilin is helped by Edge, another Errorist (as he calls himself during the first cutscene); to escape the lab and the Zorn mech sent to stop her.

The second part in our complete text walkthrough for Remember Me, the video game, refers to the second chapter you have to complete in order to beat the videogame published by Capcom.

Our Remember Me Walkthrough Episode 1: Low Life/Low Tech explains how to finish the second chapter and how to find your way in the Slums.

Furthermore, the game guide reveals all collectibles’ locations in Episode 1: Low Life/Low Tech and it also includes a video walkthrough for this specific mission.

Episode 1: Low Life/Low Tech features eleven Remember Me collectibles. Five of them are Sat Patches that allow you to increase Nilin’s health bar, and six of them are Mnesist Memories you can locate to unlock additional images in the artwork gallery.

The action in Episode 1: Low Life/Low Tech begins in Slums 004. During the first cutscene, you can see Nilin inside a coffin, talking to Edge who explains how Memorize monopolized the memories of all citizens in Neo-Paris, and how the Errorists try to stop them.

The second part of the same cutscene shows Nilin’s capsule floating down the sewers, and two Leapers. A Leaper is a former citizen of Neo-Paris who became a mutant after he absorbed too many memories. In Remember Me, the Leapers have several variations and they are Nilin’s opponents.

After a Leaper discovers Nilin’s coffin, you will gain the control over your character and you have to get ready to defeat the mutants. A tutorial on the game’s combat system will start soon, teaching you how to dodge.

Dodge several times, and you will unlock the Combo Lab where you will learn how to customize Nilin’s attacks. You don’t have too many choices at this point, so all you have to do is to follow the instructions to create the first combo attack. Now, it is time to defeat the Leapers.

Note: An important thing you have to keep in mind is that dodging is more important than dealing damage. In other words, when you see the exclamation mark above a Leaper’s head, you have two options: you can dodge, or you can interrupt his attack by landing a strike. While the second option is the preferred one, you won’t be able to use it too often later in the game, because you will be attacked by more than one opponent at a time. In this case, don’t try to rush, and instead of landing a strike, dodge away.

Note: Another strategy you should consider when you fight large groups of enemies is the one known as “pulling the enemies”. If you constantly move around, you will eventually divide the group, and you will be able to focus your attacks on a single opponent, allowing Nilin to perform chained combos, without being interrupted.

After you successfully take out all Leapers, head left and follow the tunnel. Make sure you replenish Nilin’s life using the Sat Station at the end of the tunnel, then head right. As you advance, Edge will contact you and you will receive your first objective.

Objective: Find a way out of the Leapers’ lair

When the objective appears on your screen you should see a larger area in front of you. Climb up, and move forward. Make sure you follow the yellow arrows because they will show you the way.

Follow the next tunnel and climb on the ledge in front of you, and go left. Ascend and continue to move left. Eventually, you will be forced to drop down on the ground.

Your next move is to jump on the ledge marked by your Sensen. Next to the said wall you should see a blue cart, and behind is a collectible. It is the first Mnesist Memory you can find.

Get the collectible and go up and then left. As soon as you reach the other side move down the tunnel and your objective will change.

Objective: Get to the Leaking Brain

After you receive the second objective, follow the tunnel and you will enter a train cart, to your left.

As soon as you enter the cart, turn right and move forward, towards the dead end. On the right side, you will see a glowing collectible, which is another Mnesist Memory.

Get the collectible and move towards the other side of the cart, to exit the sewers. When you exit, watch the small cutscene and drop down the ledge under the flying robot.

While on the ground there is only one way to go in order to reach the next building, where you should see a screen. The screen indicates that a Sat Patch is nearby, and that you have to find its locations based on the screenshot you observe on the monitor.

Once you have found the monitor, cross the bridge nearby and turn right to find the collectible.

Now, climb the building nearby and continue to advance until you reach another area where the Leapers await. You will also unlock the Regen Pressen, and you should use it to regain your health. Defeat all Leapers using the same strategy you have used during the first fight.

Next, you have to exit the area by climbing on the red wall, and jump on the next building. Head left and you will land on a roof where you will find another collectible.

While on the said roof, you should notice that in order to advance you have to jump on the next building. Before jumping make sure you go around the building next to you, and on the balcony is the third memory.

Continue to advance and move the cart that blocks your way. As you progress you will eventually find another screen indicating the presence of a Sat Patch.

Next to the screen, is a higher platform, on which you will be attacked by a Leaper. Take him out, then jump on the next platform, and then turn left. Behind the crane arm is a pile of garbage and the second Sat Patch.

Climb the red pipe to move forward and continue to ascend avoiding the steam. Jump only when the hot steam stops, and once you reach the top, you will trigger a new cutscene that introduces a more powerful enemy: The Skinner.

Note: Since you can’t activate any special abilities yet, you will have to weaken The Skinner. He is an opponent more powerful than the Leapers; therefore, make sure you dodge as much as you can. Take out the Leapers surrounding the Skinner and you will notice that his armor will drop. Once it does, focus all your attacks on the mini-boss, and don’t forget to use the healing combos you have unlocked.

After you defeat the Skinner, use the button nearby to activate the crane and jump on it, in order to advance. Continue to escalade the next building and you will reach a bridge. Cross it towards Tommy’s bar and eventually you will enter the market area.

After you cross several vendors, to the left you should see another bridge, and in front of you is another vendor, near a Sat Patch screen. Next to the vendor is a large reservoir. Go around it and check the Mnesist Memory on the ground.

Immediately after you pick up the previous collectible, cross the ramp next to the screen and go left. Move forward and to your right is another merchant. Go around and search the area under the balcony.

Continue to explore the market area, and as soon as you reach the ladder that takes you to the next building, go around it and look to the left side, under the balcony.

As you climb the said ladder, you will need to activate a catwalk in order to progress. Before activating the catwalk, go right, around the building to find a robot resting near a wall. Behind the robot, on the ground is the Sat Patch.

Pick up the fourth Sat Patch, activate the catwalk, and continue to advance until you reach a door you can break. Defeat the Leapers that attack you behind the door, and follow the path indicated by the yellow arrows. Jump from on ledge to another and follow the indicator, which will eventually lead you to an area where the electricity wires lay on the ground.

Jump only when the electricity stops, and then jump on the red pipe. Keep moving to the next pipe and when you fall to the ground, you should start running, because the floor will collapse. Keep running, turn right and don’t forget to jump over the gaps.

At the end of the race you will reach a ladder.

Cross the bridge nearby and activate the cart that takes you to the bar; however, stay away from Tommy, because you have one left Sat Patch to find.

After you enter the area where the Leaking Brain is located, turn right and go around the small shack to pick up the fifth Sat Patch, located on a shelf. At this point, Nilin’s health bar will increase.

Since you have found all collectibles, approach Tommy and watch the next cutscene. Eventually you will be attacked by one of Nilin’s old friends, Olga Sedova, and to continue you must solve a small puzzle. Press the corresponding button to access Olga Sedova’s memory, and you will trigger a new cutscene. You will also receive a new objective.

Nilin’s ability to alter memories plays a very important part in Remember Me; however to remix a memory you have to find glitches that that can be modified. Olga’s memory is the easiest puzzle, since it is the first one you have to solve.

After the tutorial, which explains how to rewind and how to alter a glitch, you will be able to fully remix Olga’s memory.

The first thing you have to do is to open David’s mask and let him talk to Olga. While this isn’t the solution to the puzzle, it will allow you to unlock an achievement/trophy.

Next, rewind the memory all the way to the beginning, and alter it, by modifying the following elements: the capsules, the trolley, the ping machine, the mask, and the strap.

After you remix Olga’s memory, the final cutscene of the second episode begins, and you will be sent to meet a new character. 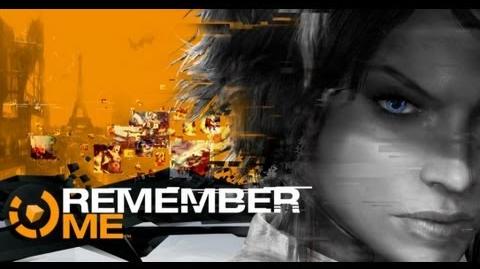