"Man is not entirely guilty, he did not start history. Nor is he wholly innocent, he continues it."
—Albert Camus[1]

"Episode 2: Microwave" is the third level of Remember Me.

Traversing the Saint-Michel district of Neo-Paris, Nilin must obtain the secrets of Kaori Sheridan's memories and rendezvous with amature Memory Hunter, Bad Request. During her journey she will encounter former Memory Hunter and ally, Kid Xmas.

"My head may still be full of amnesia, but the risks Tommy and Edge have taken to free me have got me feeling troubled. Now they want me to punish Neo-Paris’s privileged few. Edge talks about a clandestine mission to be accomplished in the heart of the Saint-Michel Comfortress. About a brutal wakeup of this high-security district, making it fertile for the seeds of revolution! And why not? Though his fight is legitimate, it’s his friendship that has been clinging to my drifting thoughts. Why did our enemies erase my memory? Am I really that dangerous? In my chest, my throat, on the tips of my fingers, I can feel the throb of the power that scares them so… It scares me too. The power to take what someone is—their memories—and bend them to my will. To re-write their history. To play God! The mere thought sends me reeling. If this ability really is the core of who I once was, then I must relearn what has been taken from me. I must master this talent!"
—Nilin Cartier-Wells

Nilin is dropped off in the Saint-Michel district of Neo-Paris by Olga Sedova, who wishes her luck on her "hunt". When she requests a guide through the city, Olga reminds her she has "family business" to handle and departs. Shortly thereafter, Edge reopens communications with Nilin. He tells her her first target as a woman named Kaori Sheridan, a famous architect in Neo-Paris, that holds precious information needed for Edge's plan. When Nilin asks how she's meant to find her, Edge tells her to rendezvous with her contact, Bad Request, at the Saint-Michel Rotunda in the district. Traveling further into the district, Edge mocks the "privileged few" of the district, the people who've ignored the suffering of the populace of Slum 404. Nilin reminds Edge that it wasn't the choice of the Mid Paris citizens to grow up privileged, to which Edge clarifies that "their eagerness to forget everything that bothers them" is his what makes him condemn their behavior.

Heading for the Saint-Michel Rotunda, Nilin encounters a Valet robot in a rush to return to their master. The two collide and Nilin falls over. The Valet attempts to apologize and asks if Nilin requests assistance. Acting quickly, Nilin objects and the Valet reminds her that her identification was automatically saved by her Sensen and hurried off back to their master, an impatient girl who showed no gratitude toward the Valet before commanding the robot to follow her.

Nilin passes an advertisement for Kid X-Mas's video X-Mas Murder, promising to take in anyone who offends him. Entering the neighborhood distrct, Nilin overhears S.A.B.R.E. Force helping a woman with memory problems back into her apartment. One of them call out to her, asking if she was alright, before another recognizes Nilin as the "escaped Memory Hunter". S.A.B.R.E. Force attacks Nilin, she manages to fend off the first wave before taking to higher ground.

Climbing across the rooftops, Nilin escapes the ground forces searching for her. Heading for the higher rooftops, Nilin is cornered yet again by two more S.A.B.R.E. Force squads. During one of the fights, Nilin remembers one of her combat moves, Sensen Fury, which aids her in her fight against both squads. When they've been dispatched, Nilin continues to scale the rooftops until she makes it to the Rotunda.

Inside the Rotunda, Edge bemoans the faults of "Big Charlie" and his Sensen invention, particularly the damages caused by the technology in the long run. Edge clarifies to Nilin that "Big Charle" is the the star genius of Memorize, while his wife, Scylla Cartier-Wells is the president of the Memorize corporation. On the other side of the Rotunda's upper floor Nilin meets with Bad Request, and is taken aback and amused by his forwardness.

She tells him she's looking for "Memorize office", Bad Request explains that he memorized the ideal path that would take her to Kaori Sheridan. With his permission, Nilin took his memories of the path to avoid surveillance. Overeager, he grabs her by the writs and thanks her for not "siphoning his head" before departing.

Nilin follows Bad Request's path through the apartments of the district, skillfully avoiding the surveillance droids and S.A.B.R.E. Force using Bad Request's Remembranes. When she finally reaches the top of the office building where Kaori Sheridan is working on her next project. Acting quickly, Nilin steals Kaori's memories and moves further up the building, unaware that she triggered a distracted Kaori's awareness. Kaori approaches the window, sure she saw something, before returning to the task at hand, unsure what she forgot.

Nilin and Edge's communication begins run into interference after she steals Kaori's memories. Edge suspects their coms are being hijacked and Nilin ends communications with Edge and moves up higher as he switches to a "clean channel". Nilin reaches the top of another building as Edge reestablishes communication. He explains that malware created by Kid X-Mas was the source of the problem. As she proceeds to upload the security protocols for the Saint-Michel Dam, Kid X-Mas finally makes his appearance.

He taunts her, proclaiming that she "chose the losing side". Nilin is a undaunted by his arrogance. He initiates a battle between them and televises it. Kid X-Mas attempts to even the playing field using his weapon, the Spammer, against Nilin. However, she eventually overpowers him and overloads his memories, stealing his Spammer in the process. Edge informs her that the Errorists counterattack against Memorize will begin shortly and that she should escape during the confusion. She deactivates Kid X-Mas's force field. She approaches one of his fallen cameras and tells a faceless audience, "The name's Nilin. And this time you'll remember me" before smashing the camera with her foot. 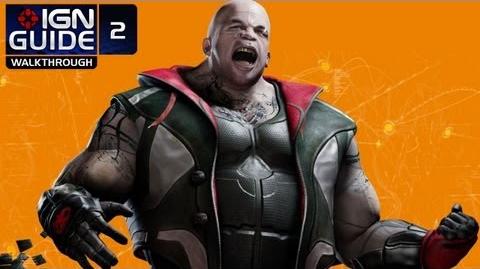 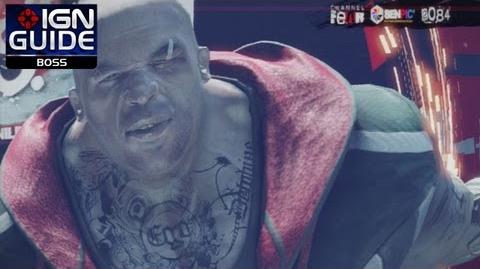