Remember Me Wiki
Register
Don't have an account?
Sign In
Advertisement
in: Pages with reference errors, Articles with spoilers, Remember Me Lore,
and 2 more
English

Errorists, contains plot and/or ending details of Remember Me and its related media. Proceed at your own discretion.

Errorists are a radical movement against the use of the Sensation Engine and the digitizing of memories by Memorize. Led by their shadowy leader, Edge, Errorists campaign against Memorize using social media platforms and attacking targets through their Senwall implants.

The Errorist movement was founded and created by Edge, an anonymous individual, in 2068.[1] They, however, did not make themselves publicly known in Neo-Paris until April 6, 2074.[3]

As Antoine Cartier-Wells’s Sensation Engine began to take its hold within the war torn society of Europe, the Errorist movement hacked the security systems of the Sensen implant to exemplify the weaknesses of the technology.[3]

However, authorities take the show of force as a hostile move against the society itself and deem them extremely dangerous individuals. Regardless the Errorists continued protest Sensen and purport its dangers to the people.[3]

The methods and beliefs of the Errorists drew to them the youth of Neo-Paris, particularly memory hunters, in large droves. Regardless of the influence Memorize had over the population, they saw considerable pushback from parts of the public who sided with the beliefs of Edge, the leader of the Errorists.

Edge ran a viral campaign against Memorize, spreading his hatred for their methods across the city. Errorists performed acts of digital theft, hacking and material sabotage in an effort to spread their propaganda. Memorize used the aid of S.A.B.R.E. Force to track down and arrest the Errorists, who were viewed as a danger to society.

During the Spring of 2084, noted memory hunter and Errorist, Nilin Cartier-Wells, was assigned the task to remix the memories Frank Forlan, the commander of S.A.B.R.E. Force.[4] She remixed his memories so that he believed he had killed his wife, Alexia Forlan, with an old gun he kept as a trophy. He committed suicide on the assumption that he would be arrested for murder shooting his wife.

Given the suspicious circumstances and nature of his death, the Errorist movement was blamed for his death.[1] S.A.B.R.E. Force conducted a city wide manhunt for not just Forlan's killer, but the entirety of the Errorist movement. The majority of the movements members were arrested, including Nilin, who was discovered at her safe house.[5] Nilin and countless other Errorists spent months in La Bastille Fortress. In September of 2084, Nilin underwent a memory wipe before she was broken out of the Bastille prison by Edge.[2] Amnesiac and confused, Nilin follows Edge's orders to reunite with Headache Tommy at the Leaking Brain and get caught up to speed on current events.[6]

After she remixed bounty hunter Olga Sedova[6], she entered Mid-Paris and retrieved codes from Kaori Sheridan to the Saint-Michel Dam.[7] When Edge used the codes to open the dam and flood Mid and Deep Paris, Nilin returned to La Bastille to free the other Errorists from imprisonment and Madame's torture.[8][4] Now free, the Errorists aid in further dismantling the high society of Neo-Paris. The larger part of the story is eventually revealed to Nilin after she rediscovers that Scylla Cartier-Wells and Charles Cartier-Wells are her parents.

With the inadvertent help of Johnny Greenteeth, Nilin destroyed the Bastille.[9] Heading for High Paris's Mnemopolis[10], Nilin confronts her father, Charles, and with the help of her mother, convinces him to allow her inside the Conception Cube's memory servers. Once there, she enters H3O's Ego Room and destroys him, freeing the memories stored within the server. The fate of the Errorists themselves in the aftermath is left in question.

As Errorists are a low profile group, they work to blend in with society. Initially they wore overt orange patterns in their clothing; however, the latter made them easier for authorities to spot.[11]

Slowly, but surely, they began using less orange to signify their status as Errorists until they appeared not unlike the typically Mid-Paris citizen in France.[11] 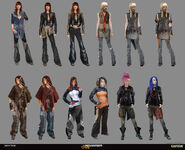