H3O, contains plot and/or ending details of Remember Me and its related media. Proceed at your own discretion.

H3O (Humanity 3.0[2]) is the A.I. of Mnemopolis' Conception Cube and true identity of Edge.

H3O is an A.I. created by Charles Cartier-Wells. The monitor for the memory server, H3O maintained the Conception Cube and its ability to store memories from the Neo-Paris populace.[1] Initially, H3O was not sentient, but awoke into self-awareness after the traumatic memories of a young Nilin Cartier-Wells wandered into the memory sever. In effect, he was created by the misery of Nilin some twenty years ago. His first memory is the sound of Nilin crying as a child[1].

As the repository for all the memories manipulated and removed by Sensation Engine users, H3O slowly, but surely, began to feel the crushing weight of human misery in the mass of memories purged from their minds.[1] The realization of his purpose in relation to the corporation of Memorize drove him mad. Tortured by the pain of humankind, H3O created an identity that would allow him to fight against the purpose for which he was created.

When Edge leads Nilin back to the heart of her family to remix Charles Cartier-Wells, his state of mind begins to unravel the closer she draws to the truth. Though Nilin is initially confused by his behavior, assuming she plans to meet Edge himself.

However, as she travels through the sever maze, she slowly begins to piece together the meaning behind his words when he tells her its been a "long time" since he relived her memories.[1] Inside the Ego Room of H3O, Nilin argues against his wish be destroyed, but he leaves her no choice; dismissing his alter ego, Edge, as a mere "partition" that was programmed to lead her back to Mnemopolis. He falls back on his identity as the core of Sensen and her natural station as a Memory hunter, an enemy of Memorize.

He taunts her throughout the battle, fighting against his own desire for survival whenever he presents her a Pain Cube to destroy. His dialog with Nilin suggests that Charles was aware that H3O had become a self-aware program and was intrigued by the possibilities it brought to the table.[1] His dialog thoughout the battle also reveals that H3O is reponsible for the creation of Leapers, stating that he diverted memories into vulnerable Sensen users in an attempt to stop being host to the worst of humanity's minds. H3O then tells Nilin that if he is allowed to live, he will eventually turn the whole world into Leapers.

H3O's battle with Nilin inside the Ego Room takes them through the stages of her journey of rediscovering her memories Alexia's murder, Scylla's crash and incursion of Leapers she once fought. When she destroys the third and final cube, H3O is weakened enough that a single blow to his Senwall using the Spammer will destroy him. Before he dies, Nilin apologizes for her actions.[1] H3O, however, thanks her for killing him. His death resulted in the the release of the memories purged from the minds of the millions of Sensen users. 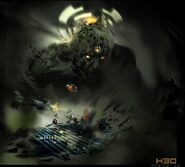