H3O is the central memory server of Memorize's Conception Cube and the true identity of the Errorist leader, Edge. To unravel the final strings of her family's legacy, Nilin must confront and defeat H3O, in order for the player to complete the game.

The following guide is provided by Douglas Shepard of Rarity Guide.com[1] 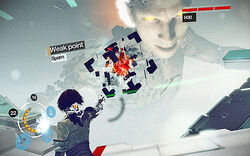 The Black Memory cube is featured in the first part. While Nilin can approach it and attack it, she cannot damage it without Sensen Fury. Give things a moment and Leapers will appear. Attack them to build the needed Focus. Once you build that first chuck of Focus unleash it as Sensen Fury and destroy the Cube. The destruction of this cube reveals a second, smaller and weaker orange cube. The Leapers are still appearing. Another Black Cube will also appear on the right-hand side of the arena.

Attack the Orange Cube with a Junk Bolt immediately then start moving as H30 begins to summon Meteors at Nilin. Once again, use the Leapers to build Focus then take out the Black Cube on the right with Sensen Fury. After that just focus your fire on the Orange Cube floating in front of Nilin with the Spammer firing Shots and Junk Bolts.

After the Orange Cube is destroyed then Nilin auto-runs to H30's chest. There she will trigger Sensen Fury. Just focus on attacking the center of his chest and do not fall off. Once Nilin gets to 10x then she scores a Critical Hit and H30 is down a full third of its health.

This starts much like the previous phase but with a massive twist. The Black Cube is out of reach and can only be hit when you take over a Seraphim with Rust In Pieces. It takes 2 strikes from individual Seraphim to destroy the Cube. Nilin will also be under attack by Enforcers this round. Keep moving, using your Cooldown and your Regen combos as needed.

This is the most difficult phase of the whole battle. The Black Cube is more accurately described as the Invisible Cube here. Nilin will also find herself under attack by Strangler Leapers. H30 is not sitting by idly this round either. It will move in and unleash Digital Waves with a Roar at Nilin. She needs to dodge out of the way to avoid taking damage while dealing with the Leapers.

To damage the Cube she first needs 2 bars of Focus for the best results. The first is to unleash a blast of Sensen DOS to reveal the Cube. From there she needs to close in and quickly use Sensen Fury to throw everything she can at the Cube in a very short amount of time. This means you need to focus your attacking to Regen Combos and Cooldown Combos.

It is very important to fire off Sensen DOS as soon as it and Sensen Fury are off cooldown. Sensen DOS has the advantage of stopping the Leapers and halting the attacks from H30 while revealing the Cube. Fury is the only way to punch through the shell of the Cube.

Once the Cube is smashed focus on destroying the orange cube. The best thing you can do is dodge until the Spammer Gauge is full. At that point you just need to move in and take out the cube in H30's chest. The limiter is removed from Sensen Fury and a 40+ combo can be attained. Get through this sequence without falls and everything comes to an end.