The AV-48N Nephilim[7] is an uncommon enemy-type encountered in Remember Me.[8][9]

Nephilim are bipedal robots built for military use. They are a variant of the Valet Robot[1], designed to engage in hostile situations and crowds. They feature a spherical shield that acts as a land mine when detonated, the tops of their heads reminiscent of a trigger of a detonator.[8][9]

Tubes blur the human resemblance and act as canisters or cartridges for their ammunition. Their thick black armor places emphasis on their role as an aggressor against hostile forces of people, opposing the orange coloring that refer to the thematic of memory and Memorize.[8][9]

Nephilim anchor themselves to the ground and can fire strong bursts of energy from their shields against anyone who draws too near their position.[10]

Nilin can use the Nephilim's shield against it and other enemies using the Pressen, Rust in Pieces, which polarizes the power of the shield. Before the shield detonates, the polarity around the Nephilim pull other enemies toward them, inflicting massage damage on all in its range.[10] 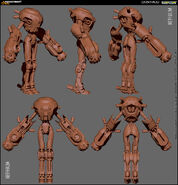 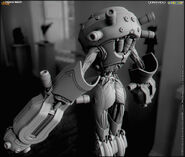 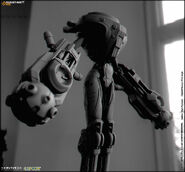