Remember Me Wiki
Register
Don't have an account?
Sign In
Advertisement
in: Articles with spoilers, Remember Me, Remember Me Lore, Technology in Remember Me
English

Sensation Engine, contains plot and/or ending details of Remember Me and its related media. Proceed at your own discretion.

"The future cries out for strong arms and bright minds. The Europe we love, our last, best chance, will be rebuilt! We have the technology, technology which needs you. Neo-Paris, Neo-You. Sensen, the new sensation implant. Available on reduced subscription! Unlock the new you! She's there, waiting. Of all possible futures, you are the best! Sensen, from Memorize!"
—Advertisement[1]

The Sensation Engine or Sensen is a digital device, a neck implant in its latest iteration, that interfaces primarily with the memory centers of the brain, but is also linked to other parts. It was originally invented by Antoine Cartier-Wells, the founder of Memorize.

Originally named the "Sen2en", Antoine Cartier-Wells moved from Paris to San Francisco on a scholarship to cultivate his idea for sharing memories on a digital platform. His early concepts for the Sensation Engine were akin to a "thinking cap" designed to map out the system of the brain. His first test subject was his girlfriend Molly. The test results from their session were promising, but he was disappointed in the machine's inability to pick up on anything beyond simple emotional responses ("happy", or "sad") and he continued to improve upon the design and its receptivity.[2]

Sometime during 2015, he created an application that could pick up on an individual's brainwaves using color coded language. The application would be able to pick up on the subject's emotional state and whether or not they were hungry. Molly attempted to make the Sensation Engine more aesthetically appealing, designing a ring that could fit the chip inside of its frame.

However, Antoine felt the ring was too cumbersome to work with and discarded the idea, preferring to work with the headset he created.[3]

After getting married in Las Vegas, Molly and Antoine tested out the application he created and were able to pick up on numerous emotional states at a bar.[3] They later traveled to Kenya where they tested the Sensation Engine headset out on refugee children. The results of their tests pleased their financial backers who continued to support them.

In 2017, Antoine and Molly were approached by a gaming company who wanted to use his technology for gaming headsets for interactive gameplay. Another company, API, offered to use their technology for social media networks and applications. Following a terrorist attack on the Experion Hotel in Rio, Antoine's wife is hospitalized after she was critically injured and paralyzed.

Antoine, desperate to communicate with his wife, used an updated version of Sensation Engine's headset to help her speak. They used Antoine's cell phone and iPad to speak and play chess with each other. Eventually, Molly slowly begins to die and requests that she be taking off life-support. The very last message she communicates to Antoine with the headset is, "Remember me."

Between 2020 and 2040, Antoine makes a breakthrough with the Sensation Engine. He relocates from San Francisco to Hyderabad, India. The application Antoine created for the Sensation Engine is mass produced and sold. His company, Memorize, now a major corporation, thrives financially thanks to agreements made with both small and major companies.[4] However, the populace of India believe the Sensation Engine to be "evil" or a machine of manipulation used to control minds.

During the height of the European Civil War, Antoine used the Sensation Engine in conjunction with the Stay at Home Experiment to convince the people of Paris to remain inside their homes during the riots. The Sensation Engine is used by S.A.B.R.E. Force to monitor the activities of the populace.

It's not until 2056 that Memorize successfully uses the Sensation Engine to remove select memories from a person's mind. The experiment, performed on a Zena Giauuopoulos rescued from Balkan peninsula, was successful and thus Antoine steered his resources toward using Sensation Engine to "remove hate" and "pain" from the world. In 2062, He creates an A.I. named "Molly" that can create artifical memories in place of the ones removed. He calls the process "Memory Remixing".[5]

Antoine's son, Charles Cartier-Wells, is the one to perfect the idea of erasing misery from the human condition when he tests the idea of "remixing" on his daughter, Nilin Cartier-Wells, after she and his wife, Scylla are t-boned by a truck on Nilin's birthday in 2064.[6][7] Nilin does not remember the accident as it happened, but as her father retold it after manipulating her memories.

In 2065 Memorize funds the first surgical implant of the Senwall, and broadcasts it across the whole of Neo-Paris. For the next seven years, Memorize popularizes the use of the Senwall, and monopolizes, financially, the ability manipulate the human mind. They create technology for the populace to replace, remove or change their memories at their pleasure.

2072 saw the first Sensen-related death with a man named Vincent Applan. His memory was wiped cleaned from his mind after his Sensen implant was hacked by an unknown assailant.[1] Memorized claimed they were not responsible for what happened to Applan and blamed "hackers" at large. As official advertisement for the Sensen began, the rise of addiction and drug supplements for the Sensen tarnished reputation of the Sensation Engine as more and more Memory Junkies began to emerge.

Disappointed with how his technology was being abused, Antoine resigned from Memorize and disappeared into Slum 404.[1] The appearance of the Leapers brought into question the ethical uses of the Sensen, which was now challenged by the extremist group, the Errorists.[1]

The purpose of the Sensen was to help retain memories, delete memories, and various other memory-related uses. Despite the original vision of Antoine Cartier-Wells, time and abuse of the technology has left modern society addicted to the removal of unappealing memories and the acquisition of new, pleasant memories. Most of the implants are successful, but some become corrupted and give life to semi-mindless abominations referred to as Leapers.

Given the right tools, Sensen devices can be accessed by anyone, granting the ability to add, remove, or alter memories. Memory Hunter, Nilin Cartier-Wells, uses this ability to gain strategic information, wipe minds of all or certain pieces of knowledge, and rewrite people's memories of events. The act of rewriting to alter an existing memory is referred to as "Remixing". 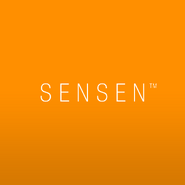 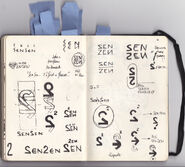 Antoine's sketches of the Sensen cap 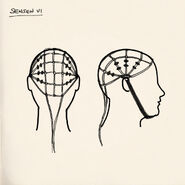 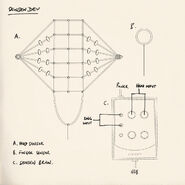 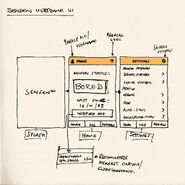 The Sensen App as it would appear on cell phones.