Skinners are an uncommon Leaper enemy-type encountered in Remember Me.

Skinners are one of the three Leaper types that have developed an ability to manipulate their damaged Sensen implants. Skinners are the strongest Leapers, commanding an immense amount of strength behind powerful chargers and melee attacks that can stop Nilin in her tracks. However, their inability to control their rage makes them easy to misdirect when dodging attacks. When they prepare to charge, be sure to pay attention to red exclamation mark that appears over his head in order to properly doge a charge attack.

Skinner are immune to most of Nilin's combat attacks and will Parry an attack, preventing harm. To break their shields, Nilin has to use a combination of preferred chain attacks in combos to gain enough Focus to use Pressen attacks like Sensen Fury. When his shield is broken, Skinners are easy to defeat.

Their one similarity with Mourners is the ability to use its fellow Leapers to its advantage. When surrounded by Leapers, the Skinner is empowered by a red shield known as the Berserk. Defeating the other Leapers around the Skinner is imperative in breaking the Skinner's Beserk mode. Skinners, like Mourners, appear infrequently throughout the game. 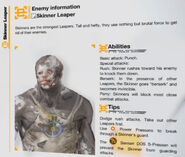 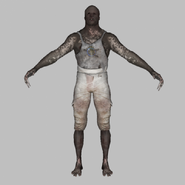 3D Model of a Skinner 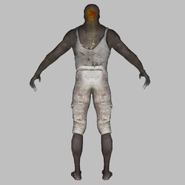